Back to IAB Canada Research

Main Finding – Ad blocking continues to be stable in Canada!

IAB Canada released its second annual, comprehensive study of ad blocking powered by comScore data, that explores the Canadian consumer incidence of ad blocking usage, as well as consumer attitudes towards ads and why they use technology that allows them to skip ads. 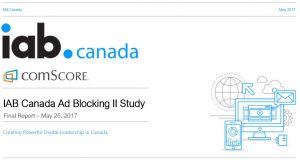 The study showed that despite high awareness, only one-in-six (18%) of online Canadians have ad blocking software/apps installed on their desktop device(s). The trend is stable compared to 17% in the previous survey, based on 8 months of passive measurement data in each study. Main reasons cited for ad blocking include advertising clutter, device performance and privacy.

French Canadians surveyed have slightly higher usage rates than Total Canada (20% vs 18%). Regionally users of ad blockers range from 13% in Atlantic Canada up to 20% in Quebec. Not surprisingly, the highest ad blocking incidence is among millennials (26%), peaking at 33% of males 18-24 and 44% of French Canada males 18-24.

Same as the previous study, few Canadians (5%) have installed ad blocking software/apps on their cell phones, 7% on tablets.

Interestingly, while awareness of ad blocking apps is somewhat higher in the new study (85%), considerably fewer Canadians actually use ad blockers than think they do… and three quarters have still never used one. Confirmed users correctly identified ad blockers by brand as the apps they use, rather than anti-virus software or pop-up blockers.

One in three non-users are at risk representing 29% of Canadians, who indicate they are likely to use an ad blocker in the near future. While Potential Blockers have a better attitude towards advertising than current ad blocker users, they are more likely to blame ads for slow loading than other non-blockers. However, users are more annoyed than Potential Blockers by ads that play video or audio automatically, long video ads before a short video and ads that make page content move.

Importantly, over three quarters of Canadians still prefer ad supported free content on the Internet, similar to the previous survey – these are the ‘Ad Receptives’.

The biggest motivators cited for uninstalling/no longer using ad blockers included site requests to turn off their ad blocker and blocked site content. This underscores the appropriateness of the publisher community’s efforts to detect ad blocking software and suspend content delivery until the publisher site is either whitelisted or the ad blocker is removed.

Based on concept testing, the study clearly indicates that publishers have some leverage over protecting their revenue streams from ad blocking and may be able to reclaim current users of these apps. Continued industry-wide impetus towards implementing the IAB principles of LEAN ads to respect the consumer online experience and the DEAL approach to creating an honest, ethical and fair conversation with consumers about ad blocking, will make a meaningful long term impact.

As a not-for-profit association, IAB Canada represents over 250 of Canada’s most well-known and respected advertisers, ad agencies, media companies, service providers, educational institutions and government associations. Our members represent a diverse range of stakeholders in the rapidly growing Canadian digital marketing and advertising sector, and include numerous small and medium sized enterprises.

comScore, Inc. (NASDAQ: SCOR) is a leading cross-platform measurement company that precisely measures audiences, brands and consumer behavior everywhere. comScore completed its merger with Rentrak Corporation in January 2016, to create the new model for a dynamic, cross-platform world. Built on precision and innovation, our unmatched data footprint combines proprietary digital, TV and movie intelligence with vast demographic details to quantify consumers’ multiscreen behavior at massive scale. This approach helps media companies monetize their complete audiences and allows marketers to reach these audiences more effectively. With more than 3,200 clients and global footprint in more than 75 countries, comScore is delivering the future of measurement. For more information on comScore, please visit comscore.com.