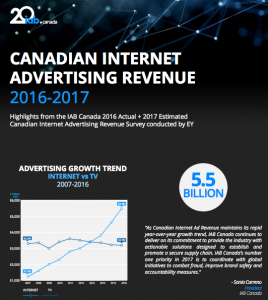 2016 Internet Ad Revenue grows sharply by 19% to $5.5 billion. Mobile continues to drive the Internet’s expansion, surging 57% to $2.5 billion, now almost 1-in-2 of all Internet ad dollars. Video grows 34%, faster than any other ad format.

“The strong growth in mobile results seen in IAB Canada’s Annual Internet Advertising Revenue Report are indicative of the central role that mobile will continue to play in the coming years. Canadians are increasingly turning to their smartphones for their everyday tasks and smart marketers are focusing in on mobile as a critically important channel.”  - Eric Morris, Director, Search Advertising, Google | Chairman of the Board of Directors at IAB Canada

French Language Internet advertising revenue grew by 13%, less quickly than Total Canada, to reach $900 million in 2016. French language represents 16% of total Canada revenue in 2016, down one point from 17% last year.

Respondents to IAB Canada’s 2016-17 Survey have forecasted that Internet Ad Revenues will grow 13% by the end of 2017, rising to $6.197 billion in Total Canada. This forecast includes a return to comparable growth in French language ad revenues of 15%, projected to increase to $1,036 million, regaining its 17% share of Total Canada revenue. Cautionary note: This forecast is an aggregate of budgets submitted by survey respondents in the 1st and 2nd quarters of 2016. As such, it may be superseded by later marketplace developments that make it more or less certain of being achieved, or possibly even surpassed.

Search and Display also represented 90% of Mobile revenues in 2016, with video accounting for virtually all the rest. Growth in Display and Video’s combined Mobile share to 51% in 2016, compressed Search’s share of Mobile to 48% from 54% the year before.

The Mobile ratio is growing at Online’s expense for each of the 3 main ad formats – rising to 56% of Display (versus 44% for Online), 47% of Streaming Video and 42% of Search.

French language Display and Search are also the principal drivers behind French Canada revenue growth in 2016, rising by 11% and 12% respectively over 2015. Only Video grew faster, +42% in French Canada. 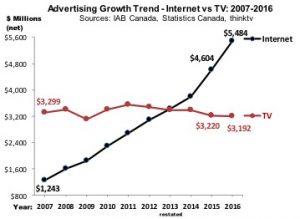 “As consumers continue to migrate toward digital media consumption, the industry is investing heavily in cross-platform solutions that will help advertisers leverage the explosive growth in multi-screen usage. Targeting and measurement capabilities are becoming much more sophisticated and attribution modelling is a major focus for advertisers who understand that each medium plays a significant role in driving campaign results.”  -Sonia Carreno, President, IAB Canada.