“The IAB Canada’s Annual Internet Advertising Revenue Report reinforces the fundamental position that digital media has earned over the last 20 years in the advertiser’s toolbox. Given that Canadians rank among the most active Internet users in the world it comes as no surprise that the largest share of spend is on digital platforms. We forecast continued double digit growth for 2014 with particular excitement for mobile and video formats.” 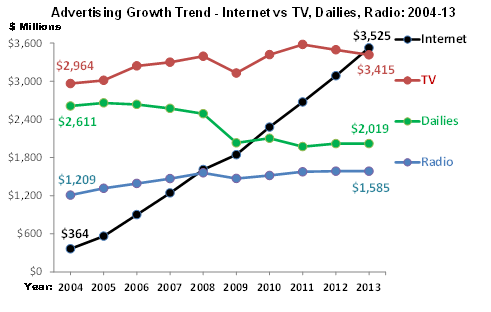 “Over the last 5 years, the industry has grown at a compound rate of 17% per year and shows no indication that this growth rate will decline. As media consumption continues to transition to new digital platforms, this double digit growth trend is expected to continue and the forecast growth of 13% is attainable and may even be considered a conservative estimate.”

About the report
The results of IAB Canada’s Annual Canadian Internet Advertising Revenue Surveys are considered the most accurate measurement of Interactive advertising revenues in Canada. First commissioned in 1998, this marks the 16th consecutive year that Online Revenues are being reported and the 8th consecutive year reporting Mobile revenues. IAB Canada retains Ernst & Young LLP to conduct the revenue studies. Results of individual respondent submissions are held in strict confidence by Ernst & Young and are released in aggregate form only. See the revenue report Appendix for details of the IAB Canada revenue survey methodology, including how net revenues are calculated and the anonymous “double blind” data collection procedure. The Canadian market totals in this report have been cleared for release by the IAB Canada Board of Directors and the IAB Canada Revenue Methodology Committee, the latter body created to recommend and oversee updates to Revenue Survey distribution lists and questionnaire design that reflect evolving industry needs.

“IAB Canada is focused on empowering the media and marketing industries to thrive in the digital economy. Fundamental change is occurring both in terms of how audiences navigate the web, as well as with the tools agencies and marketers use to reach audiences on an increasingly mobile, social, and video web journey. Against this back drop, the role of IAB Canada is to help the media and marketing industries protect the integrity of the digital media supply chain, provide tools to help make sense of measurement, and to continue to be the authoritative voice of the industry with policy makers.”